The construction of an interest rate curve out of a restricted set of market rates is the cornerstone of every application dealing with the pricing of derivatives. While there exist several types of curves discussed further below, by far the most common curve is that of interest rates, which is referred as Yield Curve in Deriscope terminology. The formal definition of the respective Deriscope Type can be found at the Yield Curve documentation page. From a practical perspective, a Deriscope Object of type Yield Curve is created in Excel by a special function that expects as input certain market rates and can be subsequently used itself as an input to other functions that calculate various financial quantities that depend on that curve.

Here is a simple example of the creation of a Yield Curve object in Excel out of market swap rates: 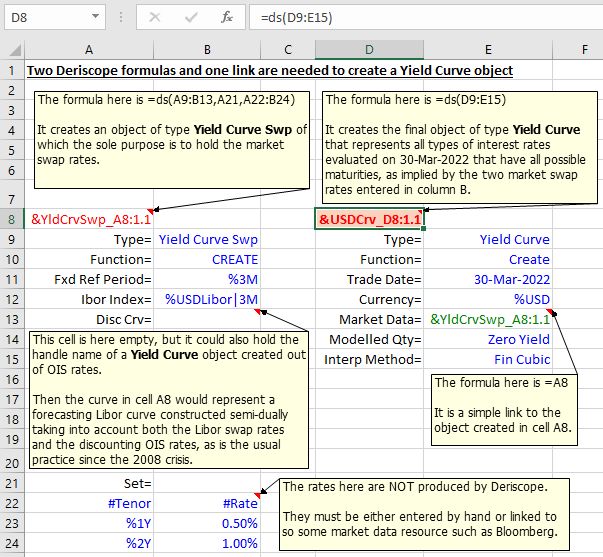 and here is how it may be used in a simple task, such as calculating the continuously compounded zero rate for a given maturity based on the ACT/365 daycount convention: 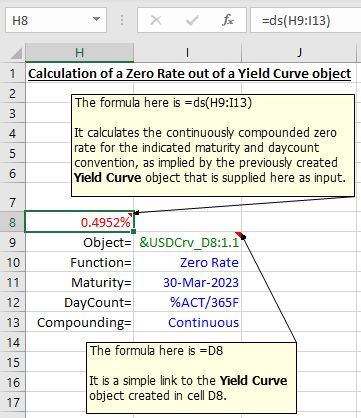 Given an already created Yield Curve object, one may calculate several types of rates for - theoretically - all possible future maturities. Such calculated rates can be then rendered visually in the form of a chart curve. It follows that a single Yield Curve object is associated not with one, but several - practically infinite - types of curves. The chart below shows two such curves generated directly from the Yield Curve object in cell D8. The y coordinates of the curve points have been calculated by a Deriscope formula similar to the one used above for the calculation of a single zero rate. 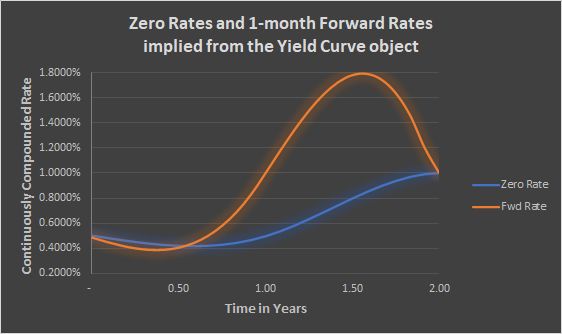 The rates implied by a Yield Curve object will be correct only if the financial instruments that correspond to the supplied market rates are indeed those traded in the market. For example, Deriscope uses the provided conventions to build two interest rate swaps and associate them with the two supplied rates 0.5% and 1%. It is important to ensure that these two swaps truly reflect the actually traded swaps. The cash flow details of these swaps can be displayed on the spreadsheet by means of a formula that returns an array of values. For example, the formula shown below returns the cash flow details of the second 2-year swap. It has been generated and pasted in cell V2 with the help of the wizard.

The last column contains handle names of objects that contain detailed information about the indices, of which the reset value is shown in the #Index column. In the spreadsheet environment, the contents of these objects could be displayed in the wizard. You may also view the interactive online version of this table where the contents of the various objects can be inspected, just like in the spreadsheet case.

A Yield Curve can be also created by combining heterogeneous data sets of market rates. Below is the hierarchical structure of all types of such data sets supported by Deriscope. They are all subtypes of the Yield Curve Input type.

From left to right, the top row types - except the first one - have the name Yield Curve Xyz, where Xyz denotes the type of respective market quotes according to the following correspondence:

The first type ImpYC allows the construction of implied Yield Curves out of some other already created curve (or curves) rather than market quotes. Currently 5 such possibilities exist according to the following correspondence:

A special case with considerable practical interest concerns the usage of ImpYC_XCCY_Disc and ImpYC_Forc in the construction of appropriate discounting and forecasting curves respectively, in currencies where no OIS contracts are traded. This technique is already used by Deriscope clients in Mexico and South Africa, two of several countries that lack a domestic OIS market. Locally traded interest rate swaps are priced using the implied cross currency discounting and forecasting curves listed above. Detailed information is available in the blog articles about the Construction of the Mexican Implied Discounting Curve and the Pricing of Mexican Interest Rate Swaps.

Other Types of Curves

While the interest rate curve is of paramount importance in the pricing of all asset classes due to the role of interest rates in calculating the present value of all types of cash flows, the estimation of the cash flows often requires the prior knowledge of other market curves that provide market information on quantities such as volatility, default intensity, inflation rate etc.

Every such market curve comes with certain interpolation and other modelling parameters that are needed to connect the dots (i.e. the observed market quotes) and create a continuous (i.e. without gaps) mathematical curve that is suitable for providing that required market information, even for parameters (tenors, strikes etc) that are not encountered in the provided market quotes.

Eventually, every so constructed mathematical curve may be represented geometrically as an N-dimensional surface, where N ≥ 0.

In the Yield Curve case, N = 1 so that the corresponding 1-dimensional surface can be visualized as a usual curve. The same applies for other curve types, such as the Credit Curve and Inflation Curve, seen below. But when it comes to a Volatility or Correlation Curve, N may also be 2 or 3 so that the curve is depicted as a regular 2-dim surface or a 3-dim hypersurface (also commonly known as "volatility cube"). The case N = 0 represents either a single value or a collection of single values. For example, the spot stock price or the spot fx rate can be seen as a 0-dim market curve that must be known in order to be able to calculate the fair price of a stock option or an fx option, respectively.

In Deriscope, all types representing N-dimensional market curves are subtypes of the very important type Valuation. This makes sense as Valuation essentially represents a specific value associated with a Quotable. As such, every Valuation object conveys market information and is therefore also a Market object. Indeed, the Valuation type is a subtype of the type Market.

Below is the hierarchical structure of the Market family of types.

Please note that the following graphical representation is manually maintained and may not be updated to include all Market types supported by Deriscope. A complete and automatically updated list of all such types can be seen by clicking the Market element below.